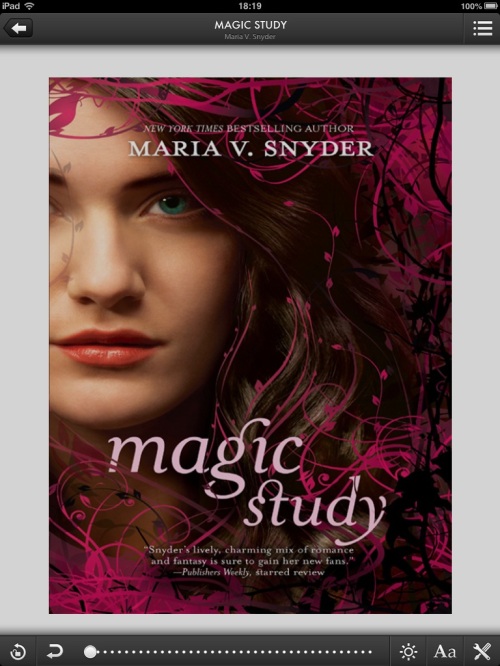 So far, I’ve managed to survive. You would think after being kidnapped as a child, imprisoned in my teens and released to become a poison taster, I would have endured enough. But no. The discovery of my magical abilities—powers forbidden in Ixia—has resulted in an execution order. My only chance is to flee to Sitia, my long-lost birthplace.

But Sitia is unfamiliar. I’m treated like an enemy—even by my own brother. Plus I can’t control my powers. I want to learn about my magic, but there isn’t time. A rogue magician has emerged and I’m targeted as his next victim.

Will my magical abilities save me…or be my downfall?

Executive Summary: magical (is that too cheesy?)

I honestly have no idea how this series has escaped me for this long (these books came out in 2008). They’re so up my alley!

We left book 1 with Yelena leaving the north and heading into Sitia with Irys (I’ll try to make this review shorter than the last one now that a lot of the main backstory has been covered.) Based on what Mogkan told her, they head to the Zaltana clan, which happens to be in the trees (I envisioned Swiss Family Robinson). Yelena finds her mother (Perl), her father (Esau), and her brother who hates her (Leif). Irys heads back to the Citadel and Leif is to accompany Yelena back to join the magician school the following week when he meets with the First Magician. Yelena tries to remember her childhood but she has no recollections even after smelling the perfumes that her mother makes.

Leif receives message to leave earlier than initially planned. En route, he and Yelena are attacked by a group of soldiers. Notable in the group: Cahil, the nephew of the former king of Ixia; Commander Marrok, a strong but fair leader who seems to be the true leader of the group; and Goel, a twisted sadist. Cahil believes that Yelena is a spy from the north and intends to take her to the First Magician to prove it and build up some credibility. Yelena projects her magic and puts her guards to sleep, picks the locks of her restraints and escapes. Goel tracks and finds her and she is able to attack and restrain him eventually going back to the camp to prove that she is not a spy. Cahil and Yelena practice fighting and Yelena easily beats him in front of all his men…Goel warns her that once they get to the Citadel, his promise not to hurt her is over.

When they finally arrive at the Citadel, Yelena sees her first beggar children. She gives them all her Sitian money. She also realizes that she can communicate with horses and that she is to get a horse of her own. She arrives to speak to the First Magician (Roze) who penetrates her mind to determine whether she is a spy. Yelena calls on Valek for strength and partially blocks the assault. She awakes to find herself in her room in the Apprentrice wing of the school. Irys (Fourth Magician) meets with Yelena and begins to start training her immediately (especially after finding out that Yelena used her magic to put a dozen men to sleep so she could escape).

Irys and Yelena work on magic every day. Yelena’s skills are unusual in that she has the power to influence people to do something for her rather than using magic to accomplish the task directly. During the afternoons, she has riding lessons with Cahil and her horse Kiki who she has a mental bond with.

A girl, Tula, is found–the eleventh victim of brutal rape and torture, and the only one left alive. She is buried deep in her unconscious, and Yelena is brought to try to bring the girl back (like she did with the Commander). Yelena learns to heal her broken bones, but cannot reach her conscious without knowing more about the girl. Irys, Roze, the other two master magicians (Bain and Zitora) are trying to figure out a pattern of the girl’s killer.Yelena makes the missing connection–they are all around the border of the Avibian Plains. When Tula’s sister arrives, Yelena nearly kills herself to try to use Opal’s memories to rescue Tula (which she succeeds in doing with help from Leif’s strength).

In the meantime, Yelena makes a “business partnership” with one of the beggar children, Fisk, who she pays in exchange for help with small tasks. Awkwardly, Cahil is jealous that Yelena never smiles at him and invites her to the New Beginnings Feast. Yelena agrees and friendzones Cahil (who imo deserves it). School returns in session and Yelena makes the acquaintance of another apprentice, Dax, and a novice, Gelsi. Dax helps defend Yelena with the other students seeming overwhelmingly entertained by her drama.

Once finding more details from Tula about her attacker, they recognize a scent in the memories that is from a plant only found in the Illias Jungle. Yelena and Leif’s parents made a concentrate of the plant recently which helps numb muscles (but in large quantities can be used to incapacitate people). A healer from the Sandseed clan helped them with the formula and once completed, they gifted him with some. The group decides to travel to the Sandseed Clan for questioning. Yelena is worn out from bringing Tula back is supposed to stay in the Citadel, but she is able to draw strength from Valek and then rides to meet the rest of the group. Yelena and Leif stop to collect a sample and get caught in a magic trick by a Sandseed Story Weaver. He shows Yelena her childhood memories in exchange for helping Leif heal (he feels guilty that he *sort of* let Mogkan kidnap Yelena). The Story Weaver tells Yelena that she is a Soul Finder, a term she’s heard others mention.

They catch up with the group and Yelena speaks to the main Sandseed group. She passes their enigmatic test and learns that the package intended for the healer was raided by the Daviians, a group rebelling against the existing traditions and practicing “old evil”, binding souls to one’s own, stealing their magic. Yelena meets with the others and returns to the Citadel where she finds that Tula has been killed in her absence. The evil man, “Ferde” disguised himself as a gardener in the Keep, has taken Opal in exchange for Yelena.

The Ixian delegation arrives with Ambassador Signe (the Commander’s female personality in disguise), Adviser Ilom (Valek in disguise), and Ari and Janco. Yelena solicits some help from Fisk looking for anyone who looks like Ferde in the city. She and Irys go to investigate Fisk’s lead. While there, a woman sneaks Yelena a message setting up a new date and time for Opal’s exchange. Yelena decides that she and Valek will make their own plan (rather than working with the Sitians).

Cahil is getting more annoying by the minute. He challenges Janco to a fight and loses, insisting some sort of magical bias. Yelena is captured by Goel who she evades by magic (controlling his mind to make him release her and shackle himself instead). During this, Valek/Ilom tries to help, revealing his disguise to Cahil. Yelena’s parents arrive, her dad gives her a sort of antidote for the Curare poison (which at high doses can paralyze people’s magic). Goel turns up dead and Cahil is accusing Valek of the murder. He tries to remove Ilom’s disguise which has been thwarted (by suggestion that Valek is disguised as someone else while the true Ilom stands in). Cahil’s crazy increases.

Ambassador Signe (aka the Commander) offers Yelena a way out. Prove her loyalties to Ixia and her execution order would be invalidated.

Yelena and Valek go off to the exchange. Yelena sees Opal, who pricks her with the Curare poison as they hug. Opal runs off leaving Yelena paralyzed. When she comes to, she sees a woman with her! The woman turns out to be Mogkan’s sister, Alea. She tells Yelena that “Ferde”, her cousin, is on a mission to acquire enough souls to be stronger than all four Master Magicians.  Yelena stabs Alea, who in turn stabs her. Kiki rescues Yelena from Alea and the Void where Yelena can use her magic to heal her wound. She finds Ari and Janco and learns that Valek was kidnapped by Cahil and his men. They return to the Citadel and find that Gelsi has disappeared after working with one of the gardeners.

Yelena uses Fisk to get her and Leif through Ferde’s shield. Ferde uses magic to convince Leif to attack Yelena to distract her while he takes Gelsi’s soul. Yelena bursts in while the soul is in between, and she swallows it. Ferde begins to torture her with visions of the souls that she has already taken (mainly Reyad) and tries to convince her that the Council will never let another Soul Finder exist. Yelena nearly weakens but in a last ditch effort, she remembers the Curare that her mother gave her, using it to paralyze Ferde. She releases Gelsi’s soul back to her body.

Yelena rendezvouses with Valek but is followed by Leif and by Moon Man, the Story Weaver. He helps her complete her promise to save Leif by sharing their memories with each other. Moon Man helps them attack the Daviian camp by moving the Void so it is above them and they cannot use their dark magic. They were outnumbered and fell back but not before Valek is able to kill Alea.

They return to the Citadel. Valek prepares to return to Ixia. Yelena tells Ambassador Signe that she would like to be a liaison between the two countries rather than being a spy. She agrees. Yelena goes to meet Valek one last time before he left and is stopped by crazy Cahil. He tells her that no one will trust her to be a liaison and he will hunt and kill Valek. Meh whatever. Valek meets Yelena. They do what people who love each other do. He goes to Ixia. She returns to the Citadel to find that Marrok was found beaten and that Cahil has released Ferde…  to…be…continued!!!

I usually hate sequels, and in trilogies, I almost always hate the 2nd book as it’s usually just details. This was a lot of details but it also had a lot of interesting plot points. Yelena meets her family, and because the story is set in Sitia, it is almost like a completely different story than book 1 (in a good way). I’m a bit nervous about book 3 though. A strong juxtaposition was created between the (communistic?) society of Ixia and the (democratic?) society of Sitia. (There weren’t enough details on either government but Snyder did highlight how different Sitia was with its beggars). I’m hoping this doesn’t become some sort of heavy handed political book, but I am still going to read book 3 to find out. I hope Snyder doesn’t do this!