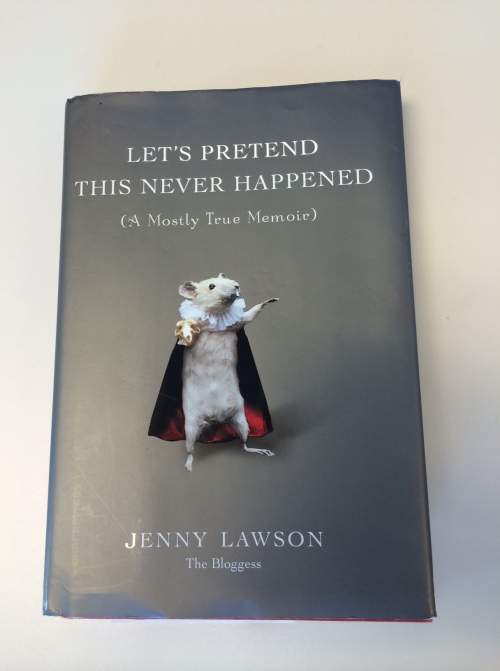 Book Description (Amazon): When Jenny Lawson was little, all she ever wanted was to fit in. That dream was cut short by her fantastically unbalanced father and a morbidly eccentric childhood. It did, however, open up an opportunity for Lawson to find the humor in the strange shame-spiral that is her life, and we are all the better for it.
In the irreverent Let’s Pretend This Never Happened, Lawson’s long-suffering husband and sweet daughter help her uncover the surprising discovery that the most terribly human moments—the ones we want to pretend never happened—are the very same moments that make us the people we are today. For every intellectual misfit who thought they were the only ones to think the things that Lawson dares to say out loud, this is a poignant and hysterical look at the dark, disturbing, yet wonderful moments of our lives.

My best friend lent me this book to read. I was moderately familiar with The Bloggess so I was pretty excited to read it. As we learned from our book club*, funny books are pretty difficult to write, and in general I found this one to be pretty funny.

Jenny Lawson was born in Austin, Texas, but moved to Wall, Texas at age 3. Their high school yearbook was titled “Where’s Wall?” which honestly I can completely relate to because I grew up about 10 miles from town (and that town has a whopping 2000 people). So a lot of the “funny stories about growing up in the middle of nowhere” rang really true to me.

However, let’s be clear. I grew up in a small town in Pennsylvania. We had running water that wasn’t poisonous and basic amenities unless you were Amish, like my neighbors, and chose not to have those. My father didn’t hunt (but basically everyone else I knew did), and he didn’t own a taxidermy shop. So I guess there is some difference between small towns after all.

Jenny recalls a series of exceedingly unique childhood events including running into a partially cleaned deer (gross), having poisonous tap water (terrifying), having pet wild animals (my sister’s friend had a pet raccoon and it was awesome), and having a taxidermist as a father (seems a bit counter-intuitive to the previous point). The two latter points though appear frequently throughout the book.

Like when her dad brought home a dead squirrel that he hid in a Ritz cracker box and used like a puppet to try to convince the girls that it was a magic squirrel.

Or like when her father brought home a bunch of turkeys (but he thought they were quails) that followed the girls to school and pooped in the cafeteria.

The book is really a series of unrelated short stories. Most of them are pretty funny, and at least some of them you can read on her blog (I had read about the metal chicken as well as some of her taxidermy acquisitions on there). The general gist of things is that Jenny is a person with a pretty unusual childhood (especially to most people), a social anxiety disorder, and a marvelously colorful family. Due to basically only those 3 things, she encountered some unusual situations and made the best of them–by creating a blog/writing a book to share the humor of them with others.

I did find it interesting that a few of those embarrassments (growing up in a small town and having a dad for a taxidermist) she later fully embraced. She moved from Houston to a small town to raise her daughter, and as an adult, she started becoming interested in collecting taxidermy (albeit taxidermy wearing funny costumes). There’s probably some sort of psychological explanation there, but I don’t dabble in that. 🙂

Like I said, the book is funny, and that is a pretty major feat. However, none of the stories are that related to each other (aside from the fact that they all happened to the same person), and often times, they are completely unrelated. Like there was a chapter in which her dog died, and then in the next chapter, he was alive again. (He was not a zombie; the chapters were simply out of order.) She did make a note about it partway through the second chapter, but it was still confusing. To read a book like this is a bit exhausting. Especially in the way that I did which was straight through (I was on a plane). I think if I had read it like I read blogs, one story each day, it wouldn’t have felt so overwhelming. That being said, if you like taxidermy and general peculiarity, certainly check out her blog. It is really funny. (Also I learned that most people believe that cats are immune to scorpions, however, it is probably more likely that cats just can detect and avoid being stung by a scorpion better than people can.)

*Our book club had a comedy/funny category last year (2013) where we read Bossypants. We determined that it was too difficult to find funny books that would appeal to everyone that we axed that category for 2014, substituting literary fiction instead.