We Were Liars – E. Lockhart 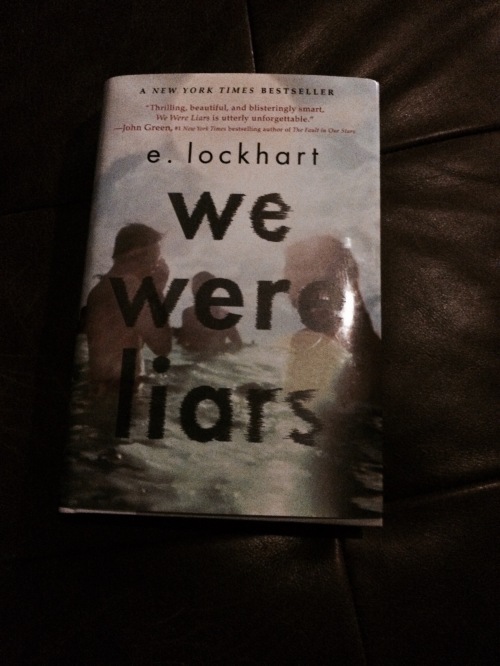 Summary (Amazon): E. Lockhart’s novel, We Were Liars, is clever, alluring, and wildly addictive. Each summer the wealthy, seemingly perfect, members of the Sinclair family gather on their private island.  We Were Liars is the story of those annual reunions; in particular what happened during a summer that protagonist Cadence is unable to remember. Prejudice, greed, and shifting patriarchal favoritism among the three adult sisters contrasts with the camaraderie and worldview of the teenage cousins and their dear friend Gat. Lazy days of sticky lemonades on the roof and marathon Scrabble games give way to twisty suspense, true love, and good intentions gone horribly wrong. We Were Liars is a story that begs to be read in one sitting. —Seira Wilson

My Review (SPOILERS!!! Seriously do not read this review if you want to read this book)

This is the first book for book club for 2015, and I think we started off well! I ended up buying this book (with a gift card my mom got me for Christmas!) because my best friend’s maiden name is Sinclair. And I know she will want to read this book as it’s so like her upbringing. </sarcasm>

The main character of the book is Cadence Sinclair. Her grandparents, Harris and Tipper Sinclair, are rich, and very controlling. Harris and Tipper have 3 daughters–Bess, Carrie, and Penny (Cadence’s mom) who are all useless individuals. They are drunk, unhappy has-beens who are living off of their father’s money, and therefore their father can control them quite easily. Let’s be honest, most everyone in the book (except Gat who is the “normal” voice) is pretty horrible.

The book begins when Cadence is about 14 or so, and from the start, we know that Cadence will be involved in an accident. (The book bounces back and forth between past and present tense.) The book is written in a style that I think really supports the main character’s age. There is a section near the beginning of the book where Cadence talks about when her dad left her and her mother. She writes “Then he pulled out a handgun and shot me in the chest. I was standing on the lawn and I fell. The bullet hole opened wide and my heart rolled out of my rib cage and down into a flower bed. Blood gushed rhythmically from my open wound, then from my eyes, my ears, my mouth. It tasted like salt and failure. The bright red shame of being unloved soaked the grass in front of our house, the bricks of the path, the steps to the porch…” After a few pages later when I realized that she wasn’t ACTUALLY shot, that the whole thing was a metaphor, I realized what a good metaphor that was for a naive (read: overly dramatic) teenage girl.

Each summer, the grandparents and the families of the 3 daughters go to Beechwood Island, off the coast of Massachusetts, which Harris owns. Each family has their own house on the island, and three of the grandchildren–Cadence, Mirren, and Johnny are all nearly the same age. Cadence is the oldest, but only by a few weeks. Starting at the summer when she was eight, a new child of similar age started coming to the island. His name was Gat. And he was the nephew of Carrie’s new boyfriend, Ed. Carrie never marries Ed because her father is a racist, and she will lose her inheritance if she does. Once Gat arrives, the four older grandchildren become known as the Liars, as they are always getting into mischief.

During summer 14, a different sort of relationship begins to grow between Gat and Cadence. They hang out all the time, share books, write love notes on each other’s hands. But they only hang out during the summer. Each of the Liars have their own “regular lives” during the school years. Right before summer 15 is when Cadence’s father leaves them. She’s excited to get to the island to get away and to see Gat, but when she arrives, she finds him mailing roses to his girlfriend. Between summer 14 and summer 15, Gat went on a mission trip to India. So he’s especially antagonistic about these rich people and their private island and all their silly things that they just shrug off like they are no big deal.

Also prior to summer 15, Tipper dies. The dynamic on the island has completely changed. Cadence and the others are instructed to keep it together for Grandpa’s sake.

And sometime on the island, Cadence goes swimming alone. She is found later curled up on the beach wearing a camisole, bra, and underpants. She doesn’t know what happened. They took her to a hospital off of the island, and can’t figure out what’s wrong with her. She has debilitating migraines, and can’t remember anything from shortly before, during or shortly after the attack. None of the Liars are returning her emails.

The following summer, Cadence’s father decides to take her on a trip around Europe. She’s upset. She wants to go to Beechwood Island to see the rest of the Liars. Her mother won’t allow her. Her grandfather’s house on the island is being redone so the summer won’t be any fun anyway. She reluctantly goes to Europe with her father and has a somewhat terrible time as she is sick so often.

The following fall, Cadence begins to take some of Gat’s lectures to heart. She begins a plan to give away something of hers every day. Some of the things she gives to homeless people. Some she mails to her cousins. Her mother is upset because spending money is her mother’s favorite activity.

Summer 17 Cadence is supposed to go to Australia with her father. However, she doesn’t want to. She wants to go to Beechwood. She hasn’t been there in 2 years and she wants to see the Liars. Her mother compromises and says she can spend 4 weeks there, but then she is staying with her father in Colorado for the remainder.

Cadence and Penny arrive on the island for summer 17. Grandpa didn’t just renovate. He tore the entire house down and replaced it with a modern monstrosity with clean lines as opposed to the old Victorian home. He even got rid of the old maple tree with the swing. Cadence is devastated but she holds it together like she’s supposed to. But it’s hard. They don’t even stay at their old house now. Cadence and her mother now stay in the “New Clairmont” with their grandfather. She is expected to be there for all meals and hang out with the little cousins. But she hasn’t even seen the rest of the Liars yet. She finally finds some time to escape and find them. They are staying at Cuddledown, Mirren’s family’s house, together. Unfortunately though, Cadence is still required to stay at the New Clairmont. She catches up with them. Things are a little awkward, especially with Gat.

Cadence continues the summer trying to piece together what it was that had happened. She writes down the memories that return and keeps trying to get more information from her cousins and aunts.

STOP READING NOW IF YOU DON’T WANT TO KNOW THE ENDING. SERIOUSLY

Eventually Cadence remembers that she and the Liars were getting pitted against each other by their mothers and grandfather. They were being used as pawns to get a better share of the inheritance. Penny was using Cadence’s first birth status to try to get more. Johnny’s mother was using his eldest boy status. Mirren’s mother was using the fact that she had 4 kids and the others didn’t. They were all fighting over petty things like table clothes. So the liars devised a plan. Everyone but them was off the island, and they set fire to grandfather’s house. That way there wouldn’t be anything left to fight over. They knew that the fire department would take a while to arrive from the mainland, and they knew that they wouldn’t be prosecuted.

But Cadence was the only one who escaped the fire. Johnny, Mirren, Gat, and the two golden retrievers all died. They weren’t able to get out in time. Cadence burned herself badly in the fire, and the emotional shock blocked most of the painful memories. She’s the only one left of the Liars.

It’s pretty rare that a book fully surprises me, and let’s be honest, especially a young adult book. I even knew there was a surprise ending before reading, and it still got me. For that, it gets four stars. I have read some other reviews that criticized the writing, but to me, it felt very appropriate. It felt like I was reading a journal written by a 17 year old, and I also think that the writing style was critical to the surprise ending. And although my family unfortunately did not have a private island (gasp), I’m certainly familiar with the family drama that accompanies a grandmother dying. I think it’s a relatable theme. All in all, a good way to kick off book club for 2015!

Tagged as E. Lockhart, We Were Liars, YA, young adult