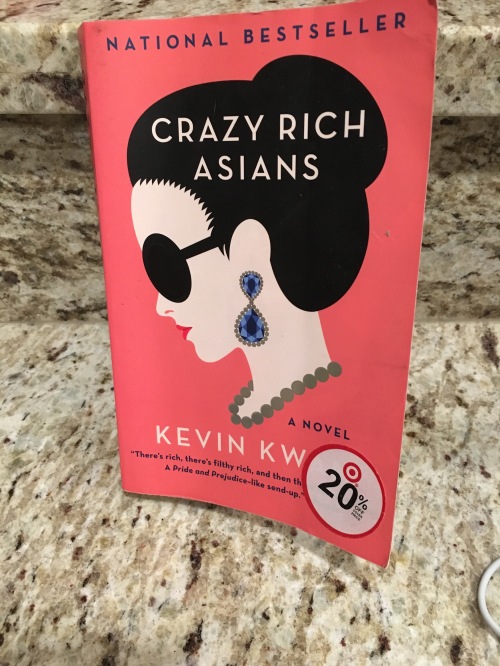 Summary (Amazon): When New Yorker Rachel Chu agrees to spend the summer in Singapore with her boyfriend, Nicholas Young, she envisions a humble family home and quality time with the man she hopes to marry. But Nick has failed to give his girlfriend a few key details. One, that his childhood home looks like a palace; two, that he grew up riding in more private planes than cars; and three, that he just happens to be the country’s most eligible bachelor.

On Nick’s arm, Rachel may as well have a target on her back the second she steps off the plane, and soon, her relaxed vacation turns into an obstacle course of old money, new money, nosy relatives, and scheming social climbers.

This book is kind of a beach read. There’s not a whole lot of substance to it, and frankly the general story has been told before. Poor girl begins dating secret rich guy and eventually finds out about his wealth (and all the family drama that goes with it). However, the people in this book were various types of Chinese descendants which made the story interesting for me. (Also the author has noted that the book was designed to appeal to North Americans)

The book itself has a family tree at the front for reference as the various family lines can be a bit confusing. Essentially three family lines, all super rich, are intertwined in the story. However, the main part of the story is about a couple in their late twenties–Nick and Rachel. They are both professors at NYU. Rachel is an “ABC” (American born Chinese) from California. Nick is from Singapore. Since Nick’s family is abroad, Rachel has never met them in the two years that they have been dating, but they have a great opportunity of going to Singapore for the summer for Nick’s best friend’s wedding.

Nick’s family is extremely wealthy, but he has kept this hidden from Rachel as he has sort of been opposed to it for his adult life. He works in a job that pays very little in a location that is isolated from the rest of his family. He hasn’t even told his mother that he has been dating anyone because he doesn’t want all the questions. She inevitably finds out prior to him telling her. She initially thinks that Rachel is going to be one of those “Taiwanese tornadoes” but eventually finds out that Rachel is *gasp* a mainlander (aka from actual China) which obviously means she’s a gold digger who is only there to steal Nick’s inheritance. Eleanor (Nick’s mother) gets a PI to investigate Rachel’s family.

When they arrive in Singapore, after traveling first class, they are greeted by the engaged couple–Colin and Araminta and go to a hawker center (food court of sorts that they have in Singapore). Everything seems like it’s going great. The following day when Nick goes to help out with Colin for wedding details, Rachel heads out with her college friend Peik Lin whose family lives in Singapore. Peik Lin and her family are fairly nouveau riche and are all about keeping up with the Joneses (probably a different saying for Asians). Regardless, Peik Lin knows EXACTLY who Colin and Araminta are and cannot believe that Rachel is going to essentially Singapore’s royal wedding. But Peik Lin has no idea who Nick is and she isn’t sure why since she knows everyone! This is when Rachel starts to realize that there is more to things than she initially suspected.

Rachel goes to Araminta’s bachelorette party where she is astounded by the lavishness–a private island. All attendees can pick out clothing items from an exclusive boutique that the bride’s mother has paid for. While there, someone steals her clothes and puts a gutted fish in her bag. Some of these girls think she’s a poor gold digger who is after one of their own.

Once Nick and Rachel return from their respective parties, Eleanor is finally back from her spy mission. She has dinner at her place and invites all her snobby friends including one of the girls from the bachelorette party who all but admits to the fish incident. Things are not going very well.

As the days of celebration for the wedding near, Peik Lin takes Rachel out to buy her some new outfits because she obviously can’t repeat wear something. When Rachel and Nick arrive to the first party, they are happily upstaged by Nick’s cousin’s girlfriend Kitty who is an actress and arrives wearing a see-through dress!

Despite the meddling of his family and family friends, when Nick sees Rachel at the wedding, he knows that it is time to propose to her. Unfortunately they are again thwarted by an old flame who interrupts the emotional moment. They head to the reception which is on par with an Olympics opening celebration complete with Cirque du Soleil performers and a ferry to a custom built castle. At the reception, the girl who broke up the proposal and the girl who admitted to the fish incident tell Rachel about how they had a threesome with Nick and he has never forgotten it. It’s the straw that breaks the camel’s back for the whole situation for Rachel. She and Nick decide to get away from it all and head to Malaysia.

Nick tells his mother that they are leaving and that he plans to propose to Rachel. Eleanor is flabbergasted and does not support it, but Nick doesn’t care and heads out anyway. Unfortunately, his mother and grandmother beat them there to stop the proposal. Rachel does not come from a proper enough family and Eleanor has the background to prove it. Although Rachel thought that her father had died, Eleanor has tracked down that he is actually in prison in China. Rachel is obviously completely in shock and she has Nick drive her into town where she proceeds to take a taxi back to Peik Lin’s.

Eventually Rachel calls her mother and shouts at her for not telling her the truth. She then slips into a depression not accepting calls from her mother or from Nick. Eventually she does meet with Nick to tell him that things are over. They are just far too different. Nick is undeterred and flies Rachel’s mother to Singapore to mend fences. Rachel discovers that the truth is much deeper than expected. Her mother’s husband who was abusive is now in jail in China, but the man who she believes to be Rachel’s father is someone different who she let go out of her life. Rachel and her mom make up, and for the thoughtfulness of it, Rachel decides to give Nick a second chance. Rachel, Rachel’s mom, Peik Lin, and Nick head off to a hawker center arguing about which one is the best.

I mostly covered the plot in my review which really is not the best part of this book. It’s the subtle stereotyping, the constant brand name dropping and the hilarious snobbery all guised in this satirical book. The author does a great job of describing the absurd amount of wealth in a way that does not feel too weighed down, and all in all it was just a fun book to read.