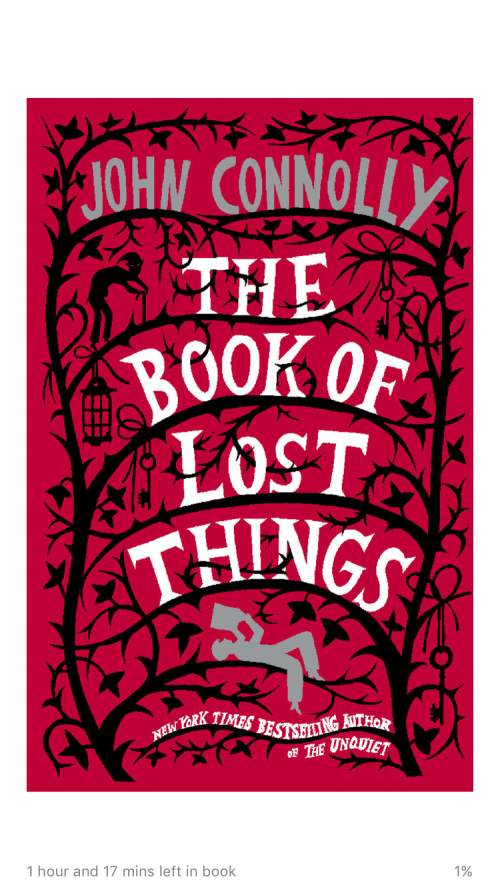 High in his attic bedroom, twelve-year-old David mourns the death of his mother. He is angry and alone, with only the books on his shelf for company. But those books have begun to whisper to him in the darkness, and as he takes refuge in his imagination, he finds that reality and fantasy have begun to meld. While his family falls apart around him, David is violently propelled into a land that is a strange reflection of his own world, populated by heroes and monsters, and ruled over by a faded king who keeps his secrets in a mysterious book… The Book of Lost Things.

An imaginative tale about navigating the journey into adulthood, while doing your best to hang on to your childhood.

I really wanted to like this book, but I just could not get into it. It felt overdone and slow, and I really started to dislike how all the good people were men and all the evil people were women, which is really odd for a boy who is missing his mother.

We are introduced in the most cliche “Once upon a time” way to the main character, David, who had lost his mother. She had been slowly dying for a while, and David thought that his OCD activities could keep her alive. When she died, he took it as a personal failure, and in his bad dreams, the Crooked Man started appearing to him in his dreams.

Five months, three weeks and four days after his mother died, a new woman named Rose started joining David and his dad for things. Once David put 2 and 2 together, he started having panic attacks and was sent to a psychiatrist. Things get even worse when he finds out that Rose is pregnant. She has the baby, a boy, and the combined family moves out to the country (it’s WW2 time in England). The house is a family home of Rose’s and while he hates the whole situation, he loves the old fairy tale books in his room.

He eventually finds out that they were the books of Jonathan Tulvey, who was Rose’s uncle. He disappeared at age 14 with another little girl Anna, who Rose’s grandparents had taken in when her parents had died in an unfortunate fire. They were never found.

The tension between David and Rose continues to grow, and there’s a big fight at dinner which David takes that it’s his fault. He storms off, and walks out of his house. When he looks back at the house from the edge of the yard, he sees a figure in his room–the Crooked Man. He races back inside, gets his father, and they investigate–to find a magpie in there instead. That night, he dreams of his mother’s voice calling him from the sunken garden in the back of the yard.

The next day, David and Rose have a huge fight which causes David’s father to be very upset with David too. Because of this, he goes back to the sunken garden and enters a different world. When he gets inside, he encounters the Woodsman. The Woodsman helps David tie a string to the tree which he came in from so he can find it again. The Woodsman tells David that the king has a book of lost things so they must find the king so that he can help David return home. But to do so, they must escape the wolves and the Loups (wolves who have evolved into more human-like form) who are very hungry. They make it to the Woodsman’s house where David wonders why his mother is luring him here with the voices that he’s hearing in his dreams, and what the role of the Crooked Man (who the Woodsman tells him is a very bad man who steals children) is.

The Woodsman tries to help David with his OCD. He explains that he has rules too. Every day he cleans his ax. He checks the house is secure, etc. etc. David begins to think this over as the Woodsman tells him that they must go back and try to get the hole in the tree to reappear because he fears he can’t keep David safe. When they return, every tree has a string on it. So the Woodsman decides to continue the original thought of taking David to the king. When they get to the bridge, with the wolves and Loups hot on their trail, there are trolls guarding the bridges. One of the bridges is fake, but they have to determine which by solving the riddle. He solves it correctly, but the wolves are right there. They chase after David, some falling on the fake bridge, but the Woodsman stays to fight them off so that David can get away.

Next David meets the dwarves who then introduce him to Snow White, who they tried to poison with an apple because she’s so unbearable. She’s morbidly obese and bosses the dwarves around making them cook and clean for her. They lead him on his way.

As he’s walking, he sees an unusual sight–a centaur of sorts. Half human girl, and half deer. She’s panicking and he realizes why. She’s being hunted, and is killed in front of him. The hunter threatens him and then hog ties him and takes him back with her. She’s a maniac who uses a special magic salve to reattach and reanimate animals together, including human children. Then she releases them and hunts them for sport. Obviously she’s saving David for an experiment, but he manages to outsmart her by convincing her to become a centaur and then killing her and then managing to get out of there.

Next he meets the soldier Roland, who is nice to him like the Woodsman. Roland keeps him company and helps him get along more quickly on horseback. They come upon a terrible scene where many have died. David meets the Crooked Man there who shows him an image of his dad, Rose, and Georgie happy and not missing him one bit. David is furious and Roland calms him, teaching him strength and how to defend himself. Roland is on a mission to find out what happened to his “friend” (it’s the 40s) Raphael. In the process, he saves a village from a Beast, but then the Crooked Man catches up to David. He shows David the snout of the wolf that had been sent to track him. He tells David more in detail what he is doing. He will make David a deal that his father will love him alone. David suspects there is more to the story. The Crooked Man wants to know what David’s brother’s name is, but David won’t tell him. The Crooked Man is furious and David goes back to Roland and they continue their quest.

Roland and David eventually find the Enchantress who has lured so many men, including Raphael, to their deaths. Roland goes in ahead, and he, like the others does not make it out alive. The Crooked Man tries to keep David from going in after him using his mom’s voice, but David persists. He doesn’t get lured by the temptations, and when he sees Roland impaled, he becomes enraged and lures out the Enchantress and impales her.

David continues alone to find the King, and when he gets there, he finds the King is expecting him. He has a luxurious room, and eats well and goes to sleep. He awakes suddenly for no reason, and finds that the guards have left his room. He sneaks out and overhears the Crooked Man speaking to the King. The King is dying. The Crooked Man says that the book of lost things has no value, but the King says that it has value to him. David opens it and realizes that it’s all from “his” world and is a book of mementos and diary entries. The king as a younger boy had a young girl arrive in his life, and he was enraged. David can relate to the story, and then at the end realizes that the King is Jonathan Tulvey.

David finds a secret passageway to where the Crooked Man goes, and finds all sorts of horrors. In one of the last rooms, he finds a large hourglass nearing its end as well as a little girl in a jar. Her name is Anna. David realizes that Jonathan brought Anna there as part of the bargain. In return, Jonathan became king and the old Queen was allowed to die. Anna was killed and the Crooked Man ate her heart. She’s been trapped in the jar since. The Crooked Man grows weaker by the day, and David realizes that the hourglass is the Crooked Man’s life. He’s waiting for David to make the deal with him for Georgie so that he can continue to live.

This is where the book should have ended. It doesn’t. It goes on for another quarter to a third of the book with a wolf/Loup attack on the castle. The main Loup kills the King. The Crooked Man dies as he runs out of time, and the King’s death causes the disappearance of the Loups as they were created by the King’s nightmares. And then, just for good measure, the Woodsman, who wasn’t dead, reappears to take David home. -_-

David returns home. It turns out he’s in the Wizard of Oz and this whole thing was a dream while he was in a coma after being hit with some debris from the downed German bomber which crashed near him just as he entered the woods. When he awakes, he goes on to be a model citizen, but nothing ever fully goes right for him. His eventual wife and son die, so he becomes a writer. He writes beloved children stories until he’s old and gray, and eventually he goes back to where he first entered the forest and the Woodsman is waiting for him.

Too cliché for my tastes. I’m not sure if it was supposed to be a young adult book, but it felt like one for very young adults if anything. As someone who solidly counts as an adult these days (sigh), I found it too overdone, too dramatic (I have a new brother, woe is me), and just not fun or enchanting in any way.

Tagged as fantasy, John Connoly, The Book of Lost Things, YA, young adult